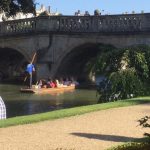 Two weeks have flown. Trite as it may sound, it seems only yesterday that I walked along the tree-lined avenue to Clare College, and stopped on the bridge to watch a family of ducks glide by on the River Cam next to a couple of punts. It was such a peaceful setting with the beautiful Clare Fellows Garden in view on the river bank. It’s so good to be back at Cambridge University again. Once more I’m walking in the footsteps of ‘greats’ such as Isaac Newton, Charles Darwin, Bertrand Russell, John Maynard Keynes, Stephen Hawking … and the list goes on. 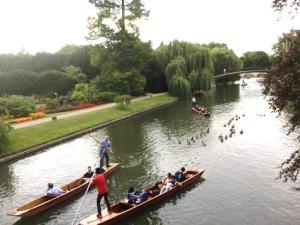 Punts on the River Cam

But it’s not just walking in the steps of these ‘giants’ that makes me feel good, nor the fact that 92 Nobel prize winners have been associated with the university, it’s the beauty and the architecture that makes it such a pleasure to be here again.

Stunning architecture is everywhere in Cambridge, and Clare College is no exception. Founded in 1326, Clare is the second oldest of the 32 colleges that make up Cambridge. Old Court, the oldest section, was built over a period of seventy-two years in the late seventeenth and early eighteenth century and is astonishingly beautiful. The buildings carry a patina of age that makes it easy to image centuries of scholars criss-crossing its paths. 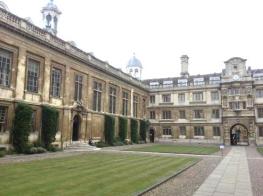 Yet, awe-inspiring as the surroundings are, equal pleasure is also gained in catching up with those I met two years ago at the history summer school – and meeting new students – the majority of whom travelled from all parts of the world including  the Netherlands, Japan, Italy, United States, Jordan, India and, surprisingly, a fair contingent from Australia. 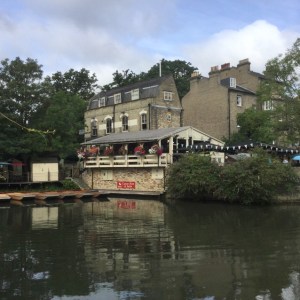 The Granta, an excellent pub to sit and relax with a glass of wine and watch the ducks glide by.

Before arriving in Cambridge I felt apprehensive about the  program I’d joined, Creative Writing, a non-fiction course taught by Midge Gillies who has published multiple histories. I knew participants were expected to produce a writing piece on a nominated topic each day, that were to be critiqued by the class. But it wasn’t so bad after all.

Writing assignments over the first week focused on biography and memoir, and ranged in subject from shoes and cake, to momentous news. Focus in the second week was on people and places, with topics including describing a view from a window, the worst night’s sleep, and home (I became a little too philosophical with the last, so word limit became a great challenge). Except for the latter, tasks were not as daunting as anticipated. Indeed, for a slow writer like myself, the exercises provided confidence that a piece could be produced within two sittings totally about 3 hours. During the course the importance of voice was emphasised, and the value of creating a sense of place or location. There were good hints offered too, including the suggestion that, if having difficulties describing something, try drawing on any of the five senses to help paint a word picture..

We were kept very busy in the course, so busy there was little time to do the many things I’d planned – perhaps another trip back to Cambridge is needed?