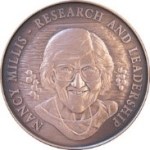 Karen recently completed her PhD at La Trobe University with her thesis: ‘Along Tyrrell Creek: An Environmental History of a Mallee Community’. Karen’s doctoral research focussed on environmental history and in particular on the farming community of Berriwillock in the Mallee region of Victoria. Karen was part of a larger Australian Research Council funded project: ‘Changing Landscapes, Changing People – Australia’s Southern Mallee Lands 1830-2012.’

Karen’s thesis not only completed all the PhD requirements it also earned her the Nancy Millis medal. The award is named after Professor Nancy Millis, who served as Chancellor of La Trobe University from 1992-2006. The medal is awarded to the authors of outstanding doctoral theses. Examiners are asked to consider if the thesis is in the top five per cent of theses they have examined. Nominated theses are then assessed following the examination process and are considered for the award through a selection process that involves the university’s Director of Graduate Research with final recommendations approved by the Board of Graduate Research. So, in essence, a rigorous process!

Karen told us that she was ‘very chuffed’ to receive the award and also very grateful to the Berriwillock community (in the Mallee) and the interviewees who assisted in her research. Karen was convinced that her public history work with Living Histories had stood her in good stead for doctoral research. ‘We’ve had years of practice in communicating complex concepts in an accessible way.’

When asked by her colleagues if she’ll be wearing the medal the next time we see her, she replied:

Yes, I’ve been joking with the kids about it. They parade around the house at the end of every soccer season wearing the medals the team awards to each player, so now I can also parade around wearing my medal!

But, as if that was not enough, we’ve now heard that Karen has won the prestigious Mike Smith prize! The prize for an unpublished essay is awarded by the Australian Academy of Science in collaboration with the National Museum of Australia. Karen’s essay (described as ‘outstanding’) was ‘The Green Years: the role of abundant water in shaping rural women’s experience in the 1950s.’

What an excellent scholar we have as a colleague – well done Dr Karen Twigg, we salute you.